I went with the Wool-Ease in Oxford Grey


I bought 2 of course, not just because of the 50% off, but because I am working on a scarf for Brian and the pattern called for 2 skeins. I started working it up last night to make sure I understood the pattern. Here's what it looks like so far.

Wool-Ease is beautiful- I may work exclusively in it from now on. It's 80% acrylic and 20% wool, so it's completely machine washable and dry-able. Being a wool blend, it has the warmth and softness of wool without the scratchiness that often accompanies it.

I also bought another skein of Full o' Sheep in Peony because I needed it to finish a pair of booties. Thank goodness I bought it, because while I had enough to finish the booties anyway, when I felted them (made them fuzzy) one of them turned out and the other didn't... so now I can make a new one, no problem.

I spent about 2 hours today winding yarn into a pull-from-center ball by hand. It's easy to do, just time consuming. It take about an hour per 5 or 6 ounces. But when it's all done, it is so much easier to manage. When you pull yarn out now it doesn't flip or move around. It's coming straight from the center of the ball. I did this because I'm taking my yarn stuff tomorrow to work on the scarf, and this makes it "travel friendly".

I keep going back and forth on wanting to get a ball winder. Yes it would make it less time consuming and neater looking balls... but my method is free. The ball winders are hand-cranked so it's not completely machine done... I think it takes the same amount of effort, just less time? I have no idea. All I know is I have about 4 lbs of yarn that needs to be wound into balls and that is a lot of hand winding!
I just did the math- that's 11 hours of ball winding. Maybe I'll do an hour a day or something while I watch Biggest Loser.


I have never done popcorn stitches before- those little poof balls- so I wasn't sure how to do them. Luckily I have this book 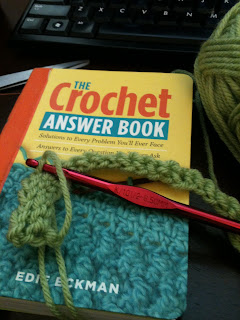 And it seriously has every answer about every thing, ever. All the special stitches, all the questions about yarn weights, gauge, zippers, free form crochet, adding beads, buttons and embellishments... you name it, it's in there. Such a helpful little book. I can quickly dive into it at any time, because it's small enough to carry around.

After this scarf is done, I'm going to work up that baby blanket I keep putting off. I actually decided to try something new! I'm going to strand two yarns together- yellow and green- and work them both at the same time. Hopefully it turns out cool. I'll have to work up a swatch and see how it looks. What I really want is this Amazing yarn- it is self striping... but kind of expensive. $6.99 for 5 ounces... and most of the patterns need 3+ skeins of it. :( I could have picked it up yesterday for BOGO 50% off, but I couldn't find the colorway I wanted to use for Brian. And since it was his scarf, well, I couldn't make it pink. I mean I could... but I don't think he would have liked it! :)
Posted by Christie Farrar at 3:10 PM

COMMENT. You know you have an opinion, air it!