But occasionally I find some great workouts, as evidenced by the last one I posted. I have another one- Arms!! 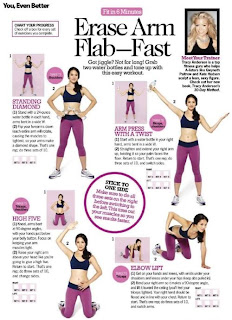 this little beauty only takes 6 minutes to do, but it will leave your arms feeling sore. Especially if you forego the bottles of water in favor of free weights, like I did.

My triceps are killing me. And I am loving it.
Posted by Christie Farrar at 5:46 PM No comments:

It's In The Cards

So, as I was browsing Pinterest, I stumbled across this work out routine. 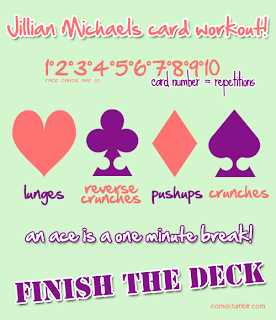 Sounded fun, so I picked up a deck of cards, shuffled it and gave it a go.

Here's what you need to know.

*Ace and a 1 are the same thing.
*I don't know if this is actually from Jillian Michaels or not.
*Face cards (Jack, Queen, King) are 10 reps also.
*This workout will kick your ass!

Brian and I took turns drawing cards and we would both do the moves. Near the end of the deck, we ended up doing 30 push ups in a row. It was KILLER.

It will get you hot and sweaty. It will keep you on your toes. It is like the perfect work out, there is no jumping jacks, it's always random, and you will be begging for that ace card to turn up!

For the past few days Drake has developed a new habit.

He doesn't want to be held or rocked to sleep for his naps/bedtime. He prefers that you don't hold him at all and that you just take him to his crib. He puts his head down and pops his fingers in his mouth, sucking them and closes his eyes. All I have to do now is just pat him on the butt for a minute or so, and he's out like a light.

I can't tell you what a BLESSING this is.

I was getting so frustrated and frazzled with all the crying and screaming when it came to nap time!

Now he just whines a little, letting me know he is sleepy, rubbing his eyes, then BAM! I put him in the crib and he is out.

It was a fluke really.

I only put him in his crib the first time because I was really getting agitated by his constant wailing in my ear and the throwing of my glasses and the pulling of my hair. I was starting to get a little cranky myself and I really wanted a nap too. So I just put him in his crib and told him Mommy needed a time out, just for a few moments. Please be good. And then he laid his little head down, his butt went in the air, and he fell asleep.

Since then, I've just been doing it and he is taking to it really well. I have no idea what changed or why, but I am not complaining! I love it.

Today he got upset at me while I was eating my all natural vanilla yogurt. He would look at me and cry every time I put the spoon to my mouth. So I took him in my lap and started feeding him some yogurt. The little piggy ate it all! At least I know he isn't picky hehe. He was also using an adult spoon and he was grabbing hold of it and guiding it into his mouth all on his own.

The kid isn't even 7 months old yet.

He amazes me on a daily basis.

Oh, and he crawls now. So constant vigilance is in order as I have to keep an eye on him. Man oh man is he quick!! But incredibly well behaved. If he has something he is not supposed to, I can tell him 'no that's not yours, let it go' and he usually does on the first time. I then give him one of his toys and all is right in his little world.

If you dont hear from me for another two weeks or so, it's because I am covered in yogurt keeping cords away from my baby as he laughs and tosses my glasses across the room for the dog to fetch and bring back. Who said being a stay at home mom wasn't fun? :D
Posted by Christie Farrar at 4:14 PM 3 comments:

Wow. Time really flew. It's hard to believe that it was 6 months ago that I welcomed my son into this world and that I held him for the first time in my arms.

I love him more each day. My heart seems to be over capacity, to the point I think I will burst, but somehow I always manage to shove a little more love for my son in. I'm a pack rat, what can I say :)

I love just about everything about him (poopie diapers are the exception) and it is amazing to see him grow and change each day.

I love you, Drake Alexander. 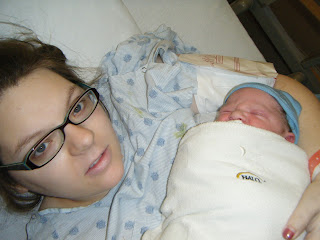 I've been bawling my eyes out over the last two days. I haven't slept. I haven't eaten much. A friend sent me a message on Facebook along with a link. The link was an obituary for her 11 month old son. He had died on June 25th, (Brian's birthday) and it's broken my heart.

I had never met her son, but I had known her for a few years and being a mother myself, I can barely scratch the surface of what she must be going through.

She is now forever in my prayers.

I don't really want to disclose the rest of the information because it is a private matter I feel that she should determine who knows and who doesn't, but I can say I have not stopped crying much at all.

Yes, I am overly sensitive. I know that because I am on anti-depressants for it. I know that I should not be crying as much as I am, or as hard as I am.

All that seems to help is to hold my family close and pray that I never have to truly experience her grief.

Brian is making a memorial art story for her and I have a special project in mind as well. I am hoping that we can give her some beautiful works of art to love and appreciate, to honor the memory of her angel, now and forever.

You are in my thoughts, L. My heart grieves with yours.

Hug and kiss your loved ones every day. Hold them close.
Posted by Christie Farrar at 1:02 PM 1 comment:

Happy Get Away From Me Day!


Last night was the first time that I was able to sleep in my own bed in over 4 days. Our power was restored yesterday around 3 pm. Brian had to work from 4 until 10 pm and I was working 10pm-3am, so we didn't get home until almost 4 am.

I love my family very much. They are the most kind, charitable, and caring souls you can ever meet. I'm not kidding. Sometimes we seem a little crass and brutally honest and that tends to make us seem a little uncaring, but when the shit hits the fan, we all pitch in to clean up. And this was no exception. I am so grateful to have a place to stay when the power went off.

But we really are an anti-social lot and being together 4 days straight? Was rough. I mean we all got along okay but by last night we kept joking about how ready we were for us to get out of there. My mom even offered to find my shoes and put them on my feet! :D I wiggled my toes and said I was ready for her to put them on! ha

We were mostly joking but we were all ready for this fiasco to be over.

My family is very sweet to put up with us for 4 days straight. It wouldn't have been easy if it was just Brian and I, but add in a 6 month old and a dog? Things were a little cramped. And that's saying it nicely.

But I can't complain (and I am not) I'm just stating facts.


We are ALL excited that we have the 4th off away from each other.

I am excited to go grocery shopping. I'm happy to be home.

Max is happy to be home.

Drake... not so much. He likes his grandparents! He's so spoiled when he is over there, so now I am sure he feels neglected by comparison lol poor kid.


Have a happy and safe 4th everyone! Keep calm and carry on.

Posted by Christie Farrar at 11:22 AM No comments:

Sorry if I seem quiet, I'm staying at my parents along with my son, husband, and dog because we lost power on Friday due to bad storms. Nearly 95% of Fort Wayne's service was interrupted with little hope it will come back on before late Wednesday night. There are 5 adults, 2 dogs, a cat, and a baby here in this tiny house. I love my parents and appreciate the place to stay... But I miss being home and I know it sucks for them as well lol. But we are all doing okay. Max is having the hardest time because he's in the garage and removed from us a lot of the time so he's wigging out. He wasn't going to be able to stay with us but boarding isn't an option with Max due to his delicate nature. He's having a hard time adjusting here lol Friday 78,000 people were without power. Today 12,000 people had power restored. It is slow going. Follow the news on Twitter via #darkwayne Pray our power comes back soon, as the whole city is in chaos
Posted by Christie Farrar at 6:33 PM 2 comments: