So my husband is a major gimp today and that totally sucks. About once a month or so, maybe every 6 weeks, he ends up getting so stiff in the neck and shoulders that he is basically useless.

It is really painful and I feel for him....... so I called around to some spas today and booked him a last minute deep tissue massage. He always complains that it hurts when I massage his shoulders and I don't like doing it anyway, so I figured might as well pay someone who knows that they are doing.

I had a choice between a woman giving him a massage and a man..... I almost picked the man for the hilarity of it, but decided to be nice.

I'm pretty sure that his neck and shoulders get knotted up from his terrible posture and his unsupported pillow, and the fact he always sleeps like his limbs are made of spaghetti. He does some weird yoga in his sleep. Here's to hoping he gets all loosened up and that I don't have to hear him complain worry anymore.

Also, here is a cute pic of my kid because I can. 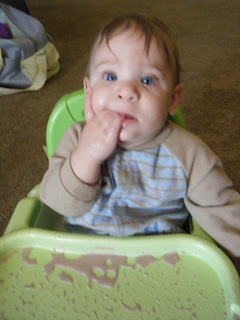 Posted by Christie Farrar at 4:03 PM

COMMENT. You know you have an opinion, air it!